Oh Joy, I Got This Feelin' Inside My Bones | October Color Kitz | Lorimar Ortega

The October Color Kitz are up (they even sold out earlier, but have since been restocked). Have you picked up yours? They are amazing and so versatile. Yes, versatile even if they are very Halloween themed. That's exactly what I did for my layout; I deconstructed the elements from the October Color Kitz to tell the story of my youngest's "oh so joyous" phase. If you are interested in hearing about the story behind the pictures and why I deconstructed the kit to fit my story, click on the link to the process video at the end of this blog post. Also, since I didn't have any embellishments that would fit my story, I made my own by using some Vicki Boutin Stamps. 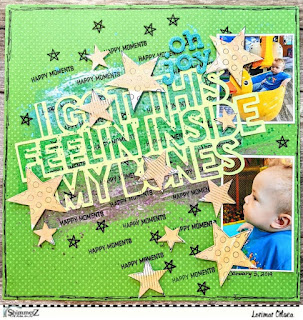 Here we go! I began by cutting the cutfile (part of the October Color Kitz) on lime green cardstock, and selected a green swiss dot Bazzill cardstock as my base. I purposely tilted the title and made marks with a pencil where my pictures were going to be. Then I began adding my colors unto the background by scraping it on with a pallet knife; without waiting for it to dry, I also added some Mother of Pearl Foilz. Afterwards, I splashed the same color on top just to get the different variations. These colors were Love Ocean #9, 4 Leaf Clover, and Plum Pudding. 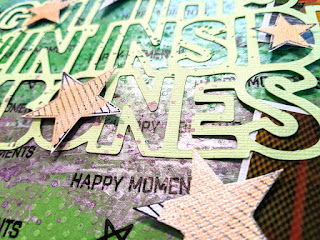 As my base was drying, I began to work on my embellishments which were stamped stars that were haphazardly colored in with Marigold. Once my base and embellishments were dried, I fussy cut the stars out and began to stamp small stars and the phrase "Happy Moments" all over the background and in the same angle as my title. Added some crazy lines as a border around the base for an extra pop of black. Finally, I popped all the stars on craft foam and began to sprinkle them all over the layout.

And that's it! Thank you so much for joining me today! Remember, you can get some paint by typing my name "LORIMAR" in the comments section of your next Shimmerz Paints order. There are a couple more close-ups below, and a process video here.

Stay safe and Shimmerz On! 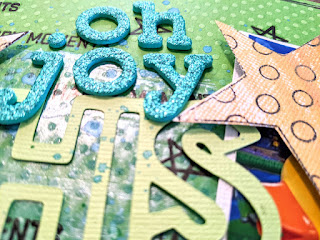 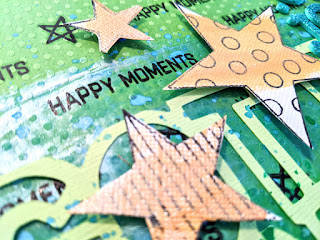 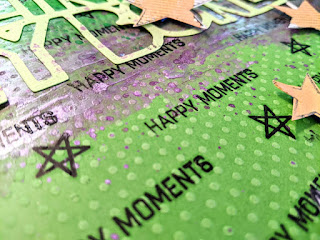