Hi everyone! Melissa here with a new page for the amazing Shimmerz Paints! Go and see all the fun treasures there! 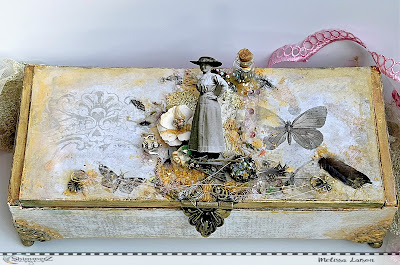 I covered a 9 x4 " wood box with 49 & Market paper by using glossy accents. I put the Tim Holtz paper doll image on with layers of corrugated cardboard. I added the items around it. I brushed on the following Shimmerz Paints: First Blush, Christmas Cheer, and Pink-A-Boo. I painted on gold mica powder and water,and rubbed some on too. 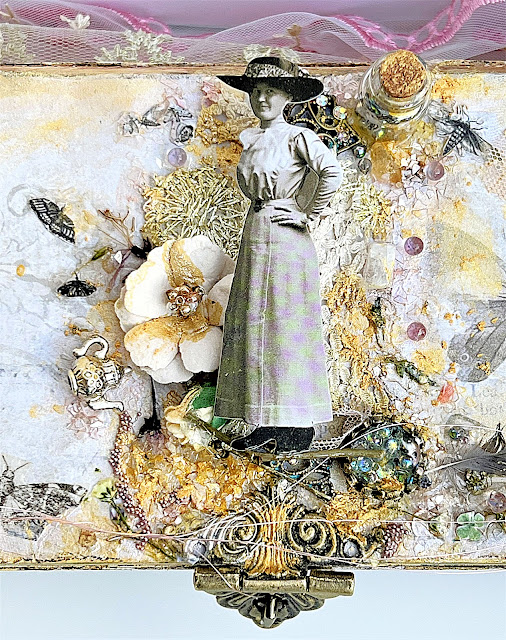 To add visual interest I added micro beads, seed beads,glass glitter,lace, pink tulle,  glass beads,dried flowers, pearls,metal from Reneabouquets,Tim Holtz,  flowers from  Reneabouquets,and bling and metal from my stash. Most of the things are glued on individually with Glossy Accents.
Thank you so much for looking, and have a great week! 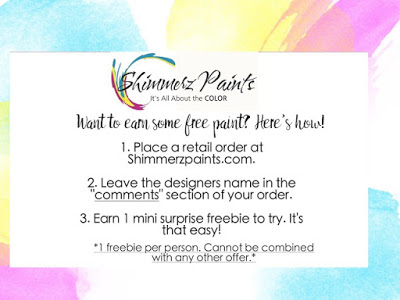 Posted by Melissa Larson at 10:52 PM No comments:

All I want for christmas by Veronika

I had two cute pics of my younger  with big xmas tree, and even I already scrap simmilar photo already, i want to scrap this two as well. I used pinkfresh studio 2021 xmas collection and wanted to make layout with not typical winter or xmas colors as this collection is really fun and colorful. 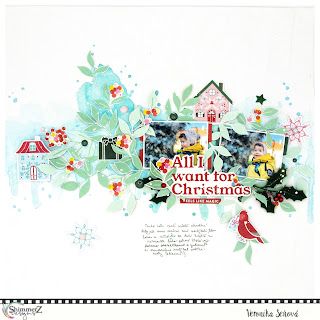 I started with fussycuting bunch of leaves  and think about my composition. I decided to go for horizontal layout and so put my shimmerz in the midle of the page. I used my turqoises, blues and green and tried to create som icicles. I just add colors directly with brush and used bit of water to have smooth shifts. I didnt match colors perfectly to my fussycuted leaves but I didnt care much and at the end i liked it anyway😂 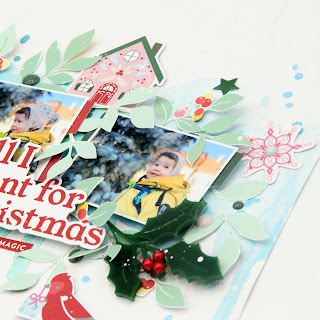 I adhered my pictures first and then tried to adhere leaves one after another as i had my color area. For title i used one of ephemeras title and like it as it was without adding anything more. then I embelish my layout with bids and pieces from collection. 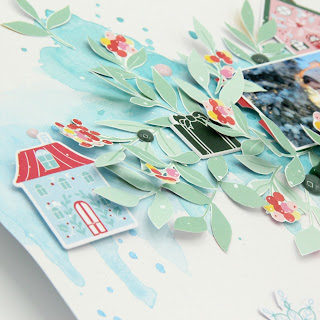 At the end I had feeling that is too bright so I added some dark green stuff, and then i needed to ad more, so I went for perspextives by Bramblefox. I was afraid if it
will be over the line but at the end it fits perfectly to my layout.:) last think what I did was white splatters to have snowwy feeling. It is definitely not typical winter layout but i like it at the end. 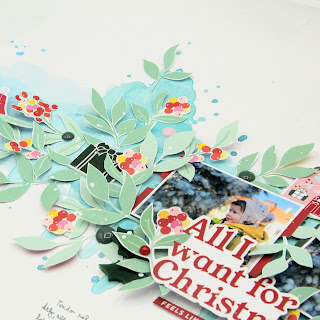 See you next time Veronika

Posted by Veronika Seňová at 11:57 AM No comments:

Hello everyone, Rhonda here with a new layout showcasing the beautiful January 2022 Color Kitz collection.
This month's kit is filled to the brim with shimmery goodness and it was an absolute joy to create with.
In this kit you receive

-Don't Rain On My Parade Vibez

-Peaches & Cream Shimmerz which is a brand new color.

-You also get an exclusive cut file AND a very generous packet of THE most gorgeous glitter!

-And as if all that isn't enough you also get a coordinating set of Shimmerz exclusive epoxy flair. 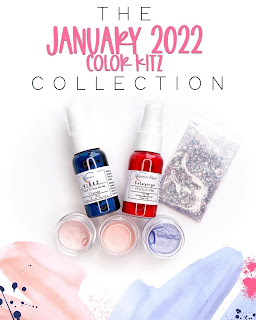 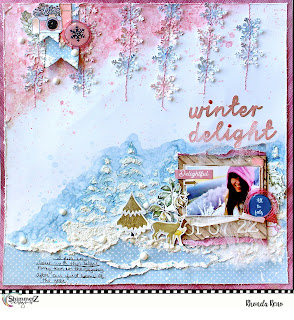 Once I covered my smooth white cardstock with gesso I got out a stencil and some texture paste to create the look of snowy trees. Once the texture paste was dry I started adding color with the Vibez "Don't Rain On My Parade" with a hint of the Inklingz "Corney Flower Blue" and then I used a paint brush and added some snow paste and while that was wet I got heavy handed with the glitter. This glitter is a mixture of fine and chunky with extreme sparkle. 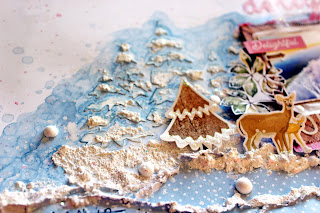 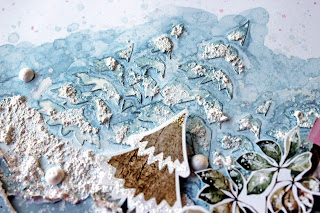 I added several layers behind my photo because two things you'll almost always find on my projects are dimension and texture. For even more interest I added some sparkly tulle behind the photo. It doesn't show up as well in the photographs as it does in person but it definitely satisfied my intended goal. 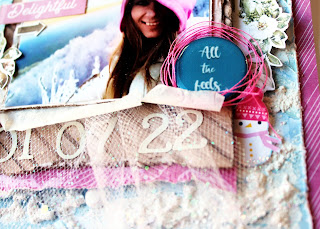 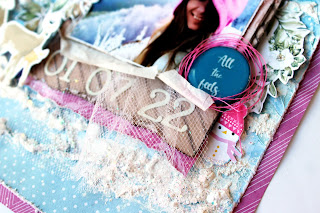 For the snowflakes cascading down my page I used all the colors in the kit to create a mixed media background. I then used a Martha Stewart snowflake punch and punched out the snowflake shapes from the mixed media background. Once I had glued them to my page I used the sewing machine to create a messy stitched line down each row of snowflakes. I then used a paintbrush to dab glue onto them randomly and added more of the glitter. 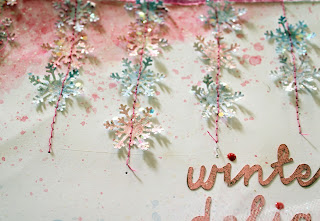 I used the cut file a little differently this month and instead of cutting it with a die cutting machine I printed it out and colored it with the "Peaches & Cream" Shimmerz, "Corney Flower Blue" Inklingz and the "Pretty In Pink" Coloringz.

I also used the "Pretty In Pink" Coloringz and the "Peaches & Cream" Shimmerz for the mixed media along the top of my layout.
The epoxy flair was the perfect finishing touch for my wintry layout. 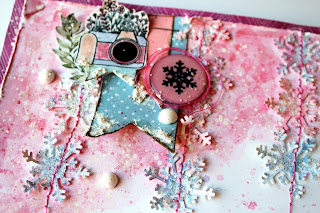 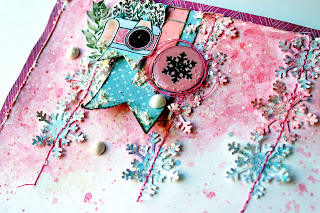 Thank you for stopping by the blog and be sure you head over to the Shimmerz shop and scoop up your January 2022 Color Kitz before they're sold out!

Posted by Rhonda at 4:47 PM No comments: 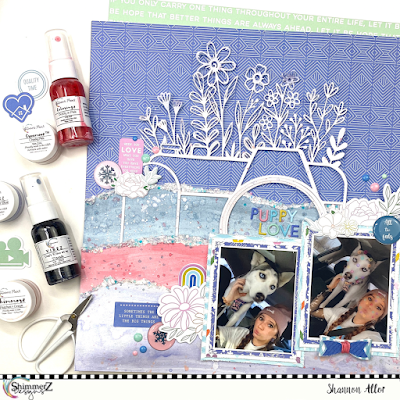 I wanted to create icy snowdrifts so I tore my pretty mixed media strips, dipped the tops of them in liquid adhesive and then coated them with the Glitter Packet. 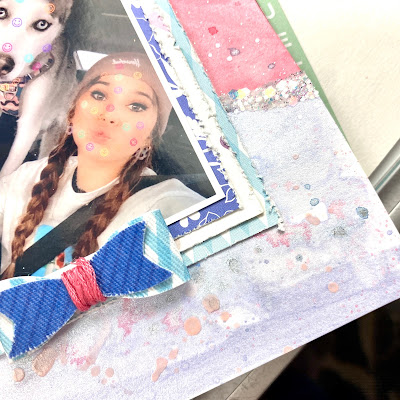 Look at how wonderfully lacey the florals are on this cutfile! 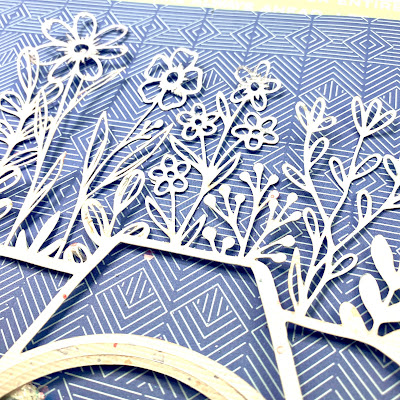 I tucked in the Dotz here and there in my clusters. 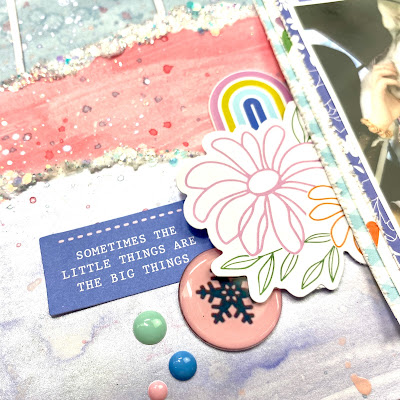 Remember to put my name in the comments section of your order to score a little freebie! 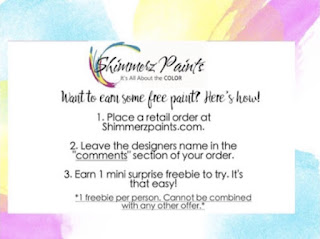 You can see my full process here:
Happy Scrapping!
Shannon
Posted by Shannon Allor at 10:00 PM No comments:

Hi everyone! Melissa here with a new page for the amazing  Go and see all the fun treasures there! 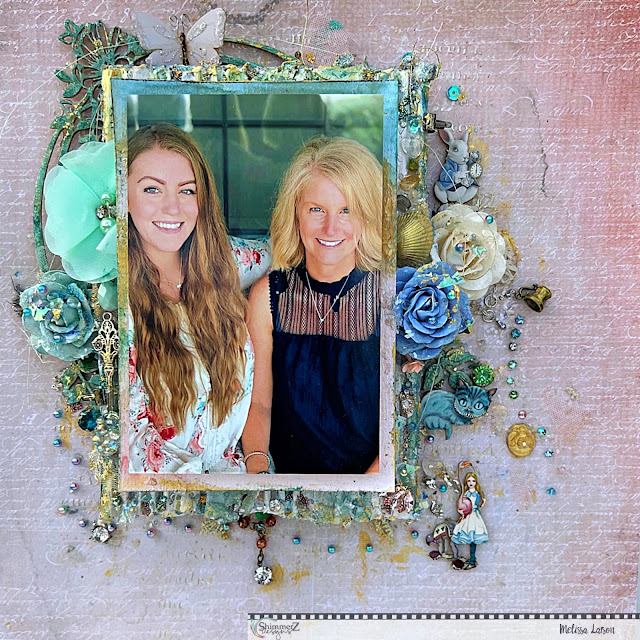 I put the layers under the photo together,starting with taping on watercolor paper under the image to make it stronger and to lie flat. I taped together layers of cardboard with the photo on top. I applied Prima crackle paste with a spatula. I put the chipboard frame  on the page, and started adding flowers and other items. I painted the corrugated, chipboard,and watercolor matt with Shimmerz Paints, First Blush, Blue My Mind, and Olive U Truly. All the gold on the page is mica powder and water. 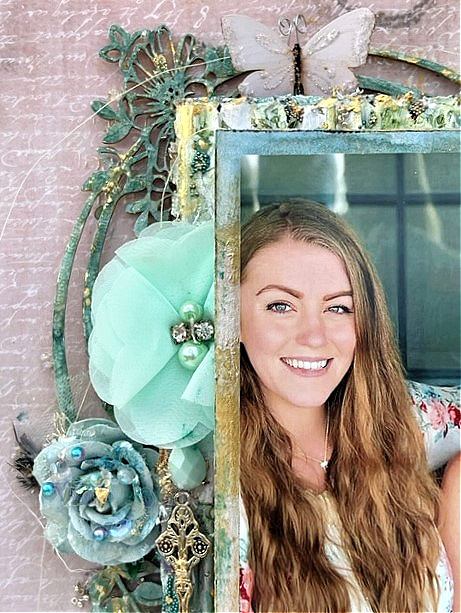 To add visual interest I added micro beads, seed beads,glass glitter,iridescent wrapping paper,gold thread, lace, pink tulle, Swarovski and other brands of crystals, glass beads, pearls,metal from Reneabouquets,Tim Holtz, sealing wax, flowers from  Reneabouquets,and bling and metal from my stash. Most of the things are glued on individually with Glossy Accents.I used double sided foam tape for the flowers and some other things,and to put the cardboard layers together. 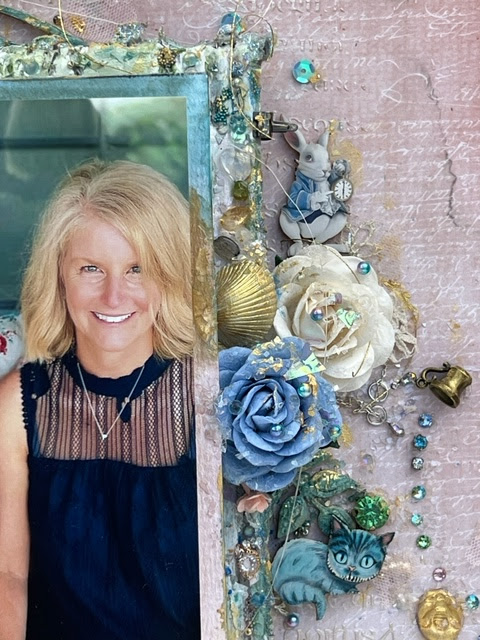 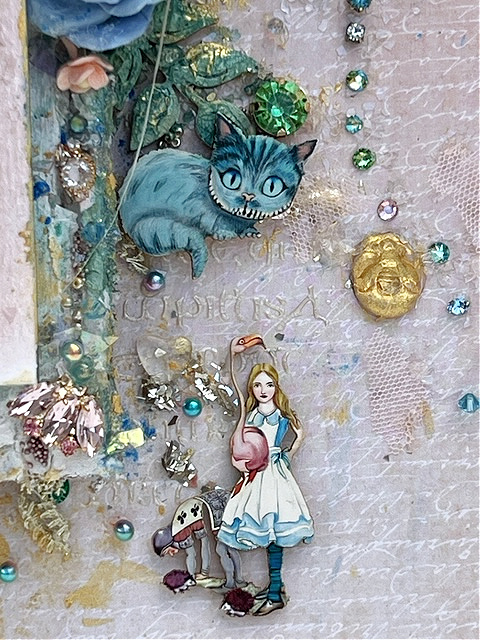 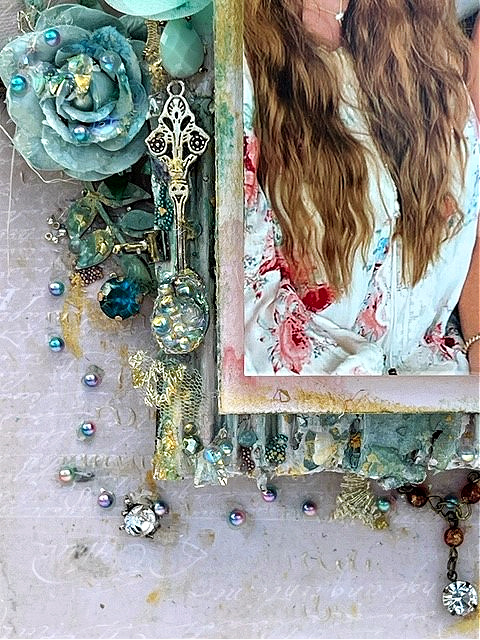 Thank you so much for looking, and have a great week!