As the days continue to cool down (at least on my side of the world) and we are gearing up for the upcoming family festivities, it is always great to take some time to enjoy the extraordinary ordinary moments with our loved ones. Today's layout features all the components of the superbly gorgeous November Color Kitz which you can purchase here; I also have a process video on my channel. 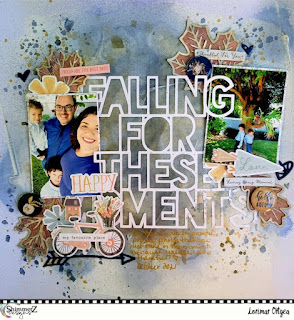 It was fairly simple and quick layout to make, so let's get started!
I began with a sheet of textured, white cardstock which I had prepped beforehand with clear gesso (white gesso will work just as well here, too!). Once the gesso was dry, I sprayed Rock-A-Fella Blue unto the background, followed by splatters of Tarnished Treasure and Greener Pastures. While my base was drying, I began to work with the leaves (cutfile included in the Colorz Kitz) which I colored with Egg Noggin', Tarnished Treasure, and Golden Wheat. After they were dry, I backed with a wood patterned paper from the Cocoa Vanilla Studios These Days Collection.
Once all my elements were dried, it was all downhill from here and very easy to assemble. I first stuck down the text cutfile in the center of the base and added a photo on either side (each photo was matted on patterned paper and popped up on craft foam). Then I arranged two leaves and some embellishments around the photos. Added in the Dotz and splattered some extra Rock-A-Fella Blue and Golden Wheat to finish things off. Journaling was added beneath the title of the cutfile using gold ink.
That's it! Before I forget, be sure to include my name in the comments section of your next Shimmerz order to get a freebie.
Thank you so much everyone for joining me today!
Have a Shimmery day!
- Lorimar 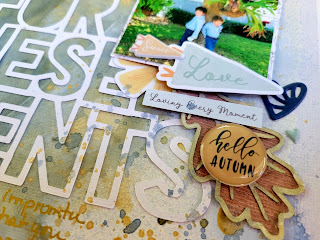 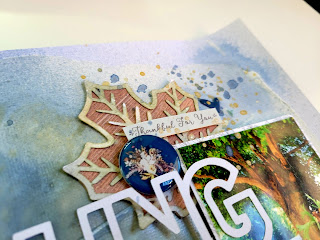 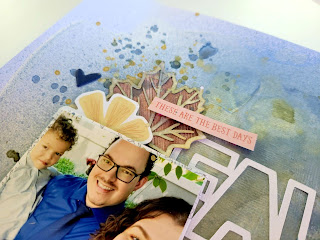 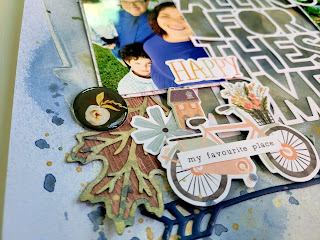