Have you had the chance to check out the new Shimmerz Tonez set? If not, click here to view them. The Shimmerz Tonez set contains at least 5 different tones of the same color making them excellent for monochromatic layouts, and building up colorful layers on your crafting projects. I chose Plum Pudding as my Tonez set (because I just love purple!) for making this layout.

I originally thought about making a monochromatic layout, but ended up mixing yellow and gold with pops of green into it. 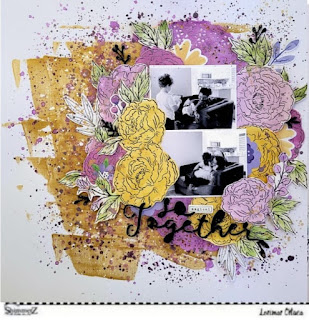 Let's get into it!

I began with a plain piece of white textured cardstock, and scraped gold acrylic paint unto it. Once that dried, I covered part of it with clear gesso in order limit the amount of colors mixing together. I then splashed Plum Crazy and Purple Peony unto the background, and colored the fussy cut flowers with Plum Crazy, Purple Peony and Sugar Plum. I also colored a few of them with Dandylion (not part of the kit), and Keep Palm and Frogget Me not (also not part of the kit) for the leaves. Selecting a doily from my stash, I sprayed it with Plum Pudding to change its color.

As soon as everything dried, I assembled my pictures and flowers as seen above; I created dimension by adding craft foam beneath some of the flowers. Placed my title (Foam Titles from Cocoa Vanilla Studios) and added in a couple of florals from Paige Evans' Bloom Street collection. Finally I splashed some Plum Pudding, Purple Peony, and gold acrylic paint all around my layout to tie everything in.

That's it! Close-ups are down below; if you'd like to watch a process video on it, click here.

Thank you so much for joining me today; remember, you can get a freebie on your next Shimmerz order by typing "Lorimar" in the notes section. 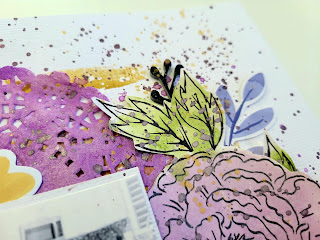 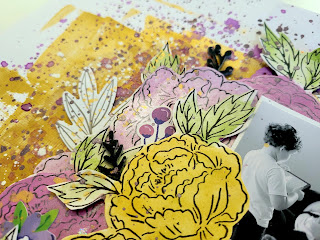 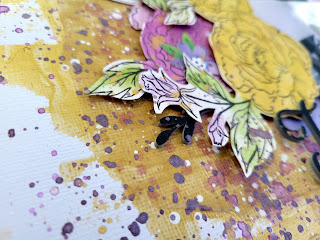