I hope you are doing well on your side of the world. I'm so looking forward to Summer and time off, but, in order to get to Summer, we first need to go through Spring; and that's precisely the layout I have for you today. It was made using the April Color Kitz which you can find on the Shimmerz website. 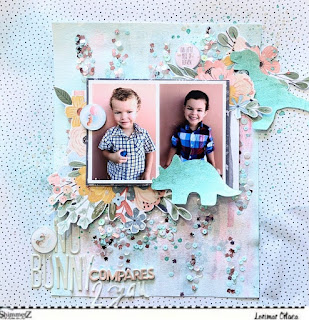 I absolutely love how this layout turned out! The pinks, teals and minty greens are just perfect for documenting Spring pictures. Let's get into it!

I first began by creating a "controlled" mixed media area. To make this, cut a piece of cardstock to roughly the size of paper. Then, go crazy with mixed media on it! For my layout, I decided to use the various colors from the Color Kit to come up with an artsy piece of paper; the techniques used were: brushstrokes, splatters, and spraying. After it dried completely, while using a brush, I added glue onto to it and then dumped the sequins. This created a textured (and awesome!) mixed media background.

As for the rest of the layout, I quickly sprayed two colors from the Color Kitz onto the base (patterned paper by Cocoa Vanilla Studios) and began to build my layout. I placed my photo on two layers of patterned paper, each of these had craft foam beneath it to better play with dimensions. Having previously cut some florals from the same collection, I added them into two distinct clusters and added the 2 dinosaurs die cuts (leftovers from a cutfile I previously; colored beforehand with It's Mint To Be).
I made my own title (I used the cutfile from the Color Kitz as inspiration for it) using 3 different sets of thickers, and finished off the layout by adding the Dotz and some splatters to tie everything together. Close-ups are down below! I hope I've inspired you to get crafty and grab the Color Kitz. 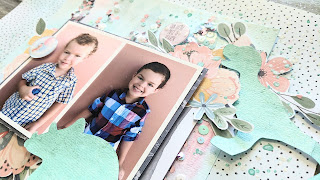 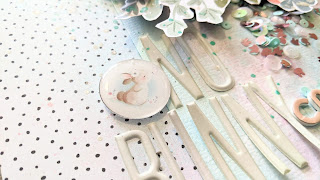 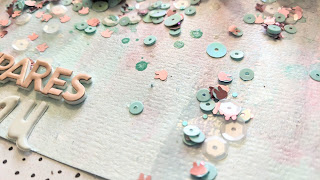 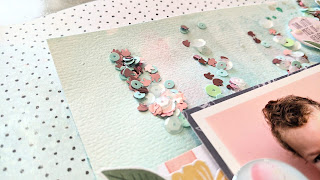